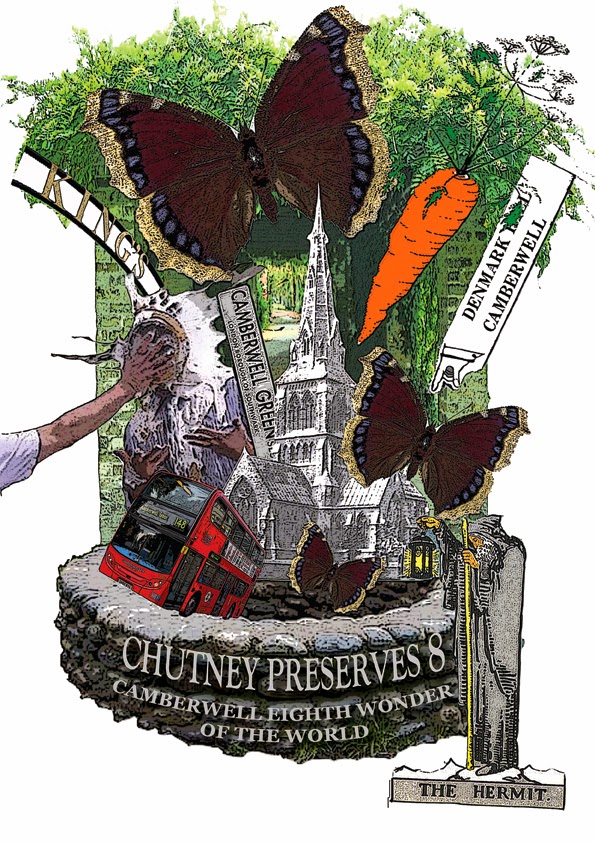 Here are the artists and their wonders:

Sarah Doyle presents The Hermits Cave
Sarah will be presenting the local legend of the Hermit who lived in the cave and guarded the magical well within.

Ash Fitzgerald presents: St Giles
Ash calls his new Chutney commission, ST.DOMESDAY The idea is drawn from St Giles Church in Camberwell and the Domesday Book in which it featured.

Tim Flitcroft presents – The Nuclear Bunker'
Tim invites you to see into the future and a post -apocalyptic Camberwell through the eyes of a Nuclear Bunker dweller.

Phillip Raymond Goodman presents: 'the Buses of Camberwell Green'.
Working from their perspective, Phillip will present to you a picture gallery of the great red metal beasts, and encourage you too gaze into their realm. “The route master haunts the streets of London town, the fiery spirits of the bendy bus hang gaunt and malevolent in the outer boroughs and all places where the roads were too small for their serpentine presence, but in Camberwell, ALL the dead buses are there, and they co-mingle with the living buses, communicating with grinding gears, exhaust smoke signals and the frantic morse code of windows vibrating in their frames, for all the buses of Camberwell exist in the eternal bus time, where they who were once dragons and behemoths roam free through the misty trails of a humanity long dead”

Caroline Gregory presents: John Ruskin
John Ruskin has given his name to a park, streets and estates in Camberwell, but what was it that drove this sensitive soul away. At Caroline Gregory's stall, 'Effie's figs and fur' you will find some naugthty, edible horrors which, along with the noise of the steam trains playing in the background, would be enough to send John Ruskin running.

Rachael House presenst: Rat Records
When Vinyl Ruled The World In A Land That Time Forgot
Records- a portal to other dimensions, coveted talismans with unsuspected power.
Join Rachael House in uncovering the mysterious and arcane origins of Rat Records.

Calum F Kerr presents: The Camberwell Beauty
Sorgmantel Summer (Eighth Wonder: The Camberwell Beauty)
The Camberwell Beauty (Nymphalis antiopa) is a large and distinctive butterfly. The first recorded sighting was of two near Coldharbour Lane, Camberwell in 1748. It was named thus in ‘The Aurelian’ published in 1766 by entomologist and engraver Moses Harris (1730 - 1788). It is also known as the ‘Grand Surprise or ‘Mourning Cloak’. The butterflies originally spotted in Camberwell may have come from Scandinavia. Beauties are strong flyers and travel over the North Sea in late summer when weather conditions are right. However they generally appear on the East Coast of England and are no longer spotted in Camberwell, until now?   In Swedish ‘Sorgmantel’ literally means Mourning Cloak. Sorgmantel is a migrant from mainland Europe. In the political climate of 2014 with the European elections, the rhetoric of exclusion and prejudice seems to prevail in relation to migrants. These mysterious visitors will visit stealthily from Sweden. They do not recognise any borders and will chant, these beautiful migrants will chant:
We are here
We are among you
We are visiting your Green
We are free and not free
We are seen and unseen
Welcome them back as one of the eight wonders of Camberwell, draw or write on them about where you have come from, before their flight begins again.

Joanna McCormick presents: Fred Karno's Fun Factory
Jo's wonder will be a giant inedible custard pie inspired cake sculpture. Emulating the Fun Factory that once stood on Camberwell's hallowed ground. It will be a splendid, day glo, glittering and awe inspiring Chutney Wonder.  "Cake" It will form the centre piece for a fun filled splat fest extravaganza where you will be invited to hit target with a mini custard pie. Every Bulls Eye wins a prize!

Frog Morris presents: The Beast of Camberwell Green
THE BEAST OF CAMBERWELL GREEN is believed to live in the long abandoned Camberwell underground tunnels and resurface to forage for food on Camberwell Green at night. Some say The Beast escaped from a Victorian medical experiment, others believe it to be space alien or an ancient tree nymph. Sightings have increased over recent months, perhaps you have seen or heard something? In June 2014 Professor Frog Morris plans to capture The Beast and exhibit it at Chutney Preserves Fair.

Sarah Sparkes presents: The Camberwell Well
Cast your wishes into the abyss of the Camberwell and marvel at the wonders you will fish out from it's murky depths!

Scott Wood presents: 20 Wonders of Camberwell From a sacred off-licence to a ghostly lion-tamer to Aleister Crowley’s father-in-law and the worlds smallest school mistress, Camberwell is full of strange and wonderful things. Join Scott Wood, host of the London Fortean Society and author of London Urban Legends: The Corpse on the Tube as he goes through twenty Camberwell legends, mysteries, ghost stories and hidden histories.

Posted by Sarah Sparkes at 01:13 No comments: 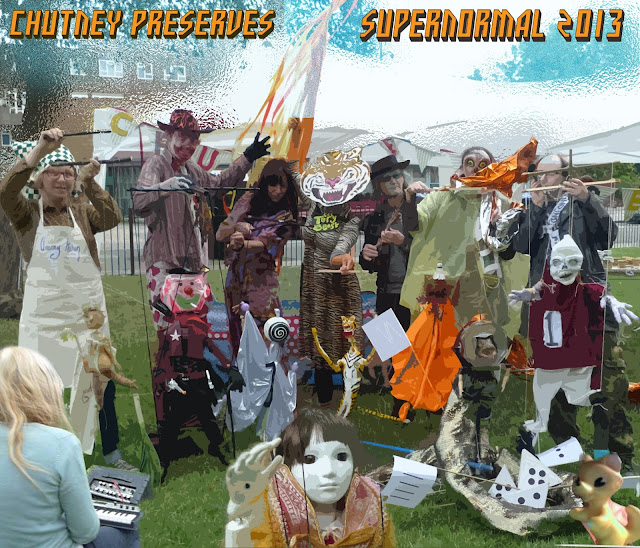 Chutney Preserves wil  be taking their Chutney Puppet Camp to SUPERNORMAL this year.  You will find us on the Village Green area on Saturday 10th and Sunday 11th August.  We will be performing, processing and generating interactive double-dealings and belly-talking mayhem.  Make your own cathartic puppet at our workshops and come join the Chutney family.

SUPERNORMAL is on the 9th - 11th August at Braziers Park, Ipsden, Wallingford, Oxfordshire, OX10 6AN
Get your tickets here
The ‘magnificent seven’ (plus zero) Chutney Preserves artists are.
Sarah Sparkes, Charlotte Squires, Calum F. Kerr, Rebecca Feiner, Miyuki Kasahara, Joanna McCormack, Tim Flitcroft, Jude Cowan Montague Linda Barck and Philip Raymond Goodman
& The A Band
‘Chutney 7 – The Magnificent Seven’ is a multifaceted, interactive live art event, which draws on the spirit of celebratory public assembly dating back to prehistory. Appearing in the guise of a fete, country fair or rarey sideshow, it is an ‘organic’ public art work, this time featuring belly-talking puppetry. The history of country fairs tells of the use of puppets for entertainment, political satire and instruction. In Chutney Preserves events, artist-made marionettes, together with puppets made by members of the public at on-site artist-led workshops will perform a series of wondrous featsInitiated in 2005, artists’ collective Chutney Preserves have worked with over 100 artists and participated in six festivals and events including: Lambeth Country Show in Brockwell Park and Camberwell Arts Festival on Camberwell Green. Chutney Preserves manifests for a magical seventh time in 2013 and The ‘Magnificent Seven’ artist/puppets will patrol Braziers park and periodically assembling to perform in the Chutney Marquee. Supernormal visitors can join the merry-making and make their own marionette at Chutney Puppet Camp. When all seven come together something extraordinary will manifest!
Chutney Preserves was initiated by Marq Kearey and Sarah Sparkes and is currently is herded by Sarah Sparkes.
http://chutneypreserves.blogspot.co.uk/
Join us on the FaceBook
Posted by Sarah Sparkes at 15:20 No comments:

Chutney Preserves 7: SEVEN, a set on Flickr.
Chutney Preserves called on the power of SEVEN at this years Camberwell Arts Festival 2013. See their 'rare doings' up close by clicking on one of the little pictures above!
Posted by Sarah Sparkes at 14:55 No comments:

Chutney Preserves are proud to be representing Camberwell at the Camberwell Arts Festival
Chutney Preserves 7 - SEVEN
23rd June 1pm - 7pm
Camberwell Green
Invoking the spirit of the ancient Camberwell Fair and its promise of “RARE DOINGS IN CAMBERWELL”
(Overground to Denmark Hill, Tube to Brixton then 35,45,345 bus or Elephant and Castle and 12,35,40,45,68,148,171,176,468 bus) 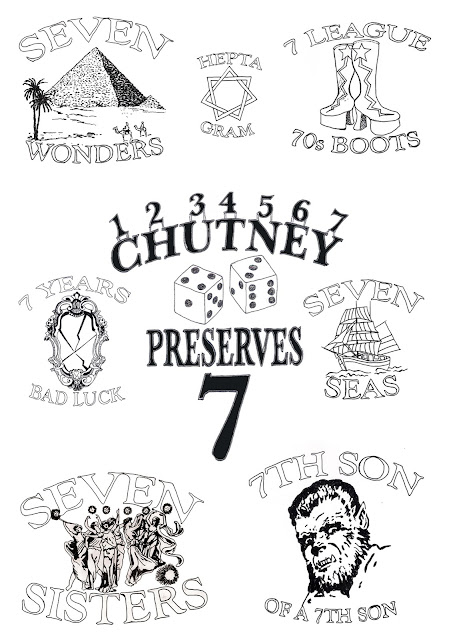 The Chutney Preserves invite you to particiapte, or just watch in wonder, as they initiate ‘THE SEVEN’ in an afternoon of belly-talking puppetry and other rarey side-shows.
SEVEN artists have made SEVEN puppets - when all SEVEN get together, summoned by the mysterious ZERO, something magnificent will happen!  Please note puppets and your soul may be eaten as part of this process.
Throughout the afternoon, FREE Puppet making workshops for all will enable you to materialise your inner Chutney. A marching version of the A Band will manifest amongst the mayhem and Chanteuse ‘La Severine’  will serenade us. Magpies and vegetables are on the menu at an uncanny cafe.

Posted by Sarah Sparkes at 16:38 No comments: 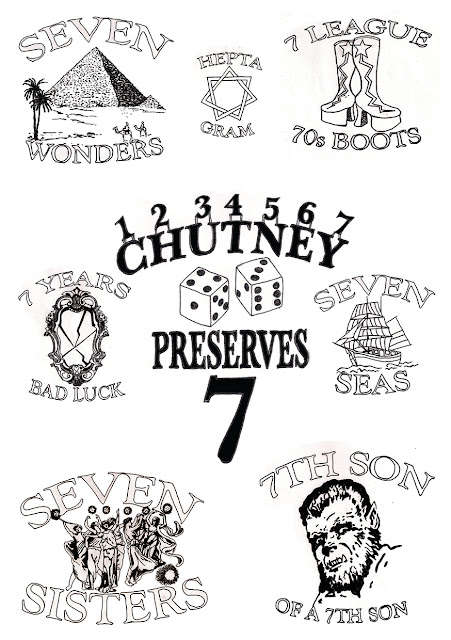 Chutney Preserves raises its slimy head for the seventh magnificent time; SEVEN is the magic number and our theme this year!
Chutney Preserves welcome your proposals for performance, participatory actions, temporary art works, rarey side-shows, interactive double-dealings and other interventions.
There will be small marquee and tables available on request.  You are encouraged to bring your own tent (if you have one) to pitch for the day on Camberwell Green to act as your HQ or to make-over in a suitable fashion.
The event will be publicised and archived as part of Camberwell Arts Festival and through the Chutney Preserves website. There will be flyer, copies of which can be posted to participating artists on request.  You will be joining the Chutney family and will be looked after - kept fed and watered - with cheese and chutney sandwiches and beer. The joy of Chutney will stay with you always.

Deadline for submissions: May 12th
Send your proposals to: chutneypreserves@hotmail.co.uk
with the subject - Chutney SEVEN

Posted by Sarah Sparkes at 08:59 No comments:

Do You Feel Lucky?

Chutney Preserves return to Camberwell Green this June for Camberwell Arts Festival. This is the seventh Chutney Preserves and we take that magical number as our theme. We are seeking submissions and will send a call out shortly.
Posted by Sarah Sparkes at 04:06 No comments:

Chutney Preserves 6 -The Puppet Games, a set on Flickr.
Posted by Sarah Sparkes at 05:22 No comments: